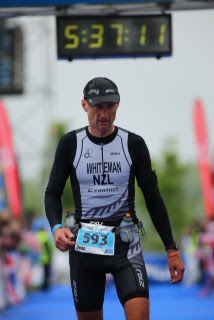 A relative newcomer to the sport, Dean Whiteman has had a pretty quick rise, making it over to the rather frustrating long distance triathlon (duathlon) champs in 2013. I’ve always thought he was pretty cool as he has the same bike as me, and seeing as he was also the last person to register for the club in 2013 (sneaking in at  6am on the 31st December) I thought we’d better have a chat to him. Turns out he also has a doozy of a photo capturing his ‘embarrassing triathlon moment’, enough to make me laugh out loud on one of my first dreary days back at work this year…

What do you do when not training or racing?
Read novels, play tennis and build Lego with my youngest son. Ski in the off season.

How did you get into triathlon?
Was racing offroad motorcycles (Enduro,Hare Scramble and some MX) and did  some run training with Jeremy Boyd at Shoe Clinic Porirua. He convinced me to give Triathlon a go as a sort of cross training. Had done some swimming previously so thought why not. Did a single sea swim in the wet suit and straight into a long scorcher. Was surprised by the washing machine at the start and had a major hyper ventilate. Ended up paddling on my back till I got my breathing under control. As I crossed the finish line I remember thinking “why would someone punish themselves like this by choice” but it all didn’t seem so bad 10 minutes later and was planning the next training session to try and reduce the pain on the way home.  Shortly after this had a meeting with a tree at speed during an event on the motorbike which shortened my left arm by 1.5cm ( traction works wonders) so decided it was time to hang up the boots and concentrate on Triathlon. Know anybody who would like a Husqvarna WR250, excellent condition? (Yes still in the garage after 2 years.)

What is the best place to train in  Wellington ? Describe your ideal training day.
Have to support local and say Paekakariki Hill for medium Cycling days and Pukerua Bay\Plimmerton South Beach for running and sea swims . Ideal training day is Long Cycle Day – Start Pukerua Bay, Up Moonshine Rd and down to Hutt Valley, Over to Blue Mountains and upto and along  Whitemans Valley, Down Wallaceville Hill and then back down river road\Motorway (hopefully with a tail wind) and up Ngauranga Gorge then back to Pukerua Bay via J’ville,Tawa. Finish off with a half hour jog around Pukerua Bay. Stumble into home for coffee and juice smoothy and then recover on the lawn in the sun.

Describe your worst or most embarrassing moment in triathlon.
At a Scorching Duathlon, struggled to do up my cycle helmet in T1. Finally clipped it on and ran out onto the road only to have the marshal ask me with a straight face if I always wore my cycle helmet back to front (photo attached – Not sure why my wife didn’t let me know, she claimed she didn’t realise until after the picture was taken – Tuis Billboard I think). Went out and bought an Aero helmet next day as I figured you really have to try hard to put them on the wrong way. 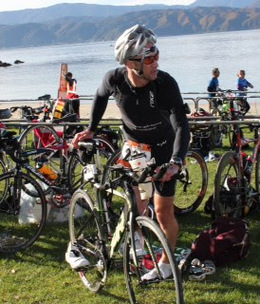 Your most significant triathlon achievement?
Representing NZ at the ITU LD Champs in  Belfort,  France. Managed a good bike time and first run and was happy with the result overall even though it was changed to a Duathlon due to the cold weather – around 11 degrees race morning with some athletes treated for exposure after the event.

What else would you like to achieve in your triathlon career?
Do another ITU LD Champs where they have all three disciplines and the full 120Km bike course.

What is your favourite race and why?
The Scorchers, Cant beat the friendly laid back atmosphere and there is always someone better than you competing to spur you along.

What would your words of advice be for a beginner triathlete?
Have Fun.
Have a training plan written down for each week and tick off the sessions so you can review your progress
Have somebody more experienced you can ask questions or advice of ( Friend or Coach).
Make sure you have a nutrition plan especially for recovery from longer training sessions.
Have a Goal such as to complete an event or beat a certain time. This helps you get out and train.

Quick Questions:
Best discipline:  Cycle – Racing Dirt Bikes seems to have helped here.
Describe your swim technique in 5 words: three lots of five – stroke,rotate,glide,breath, kick – (or is that) kick,breath,rotate,stroke, glide – damn still not fast enough.
Your most epic bike ride: ITU LD Course which included the Ballon de Alsace. Was drizzling at the top of the Ballon and very slippery on way down with multiple switchbacks. Heard reports of many competitors crashing and riders having to take evasive action to avoid them. Thought I was moving along fairly well with my dirt bike experience but was still carved up by several riders on the descent. Great ride.
Ironman or Olympic distance: Prefer the longer – Half Ironman or ITU LD – not as punishing as Ironman.
Your role models:  No specific athletes but take note of advice from any of the top long distance athletes. Met Terenzo Bozzone at the LD Champs in  France  and was very impressed with his determination and words of advice.
Your tri nickname: None Really –  Deano ?